Today wasn’t the best day for a good run. Work sucked, the weather sucked and my left knee decided to start hurting again, requiring an icing after the run. 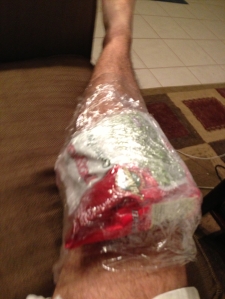 (Forget those blue ice packs you get at CVS. Frozen peas and Saran Wrap is the best way to ice a muscle or joint. The peas are malleable and the Saran Wrap keeps everything in place. Try it next try you’re hurting.)

Two minutes after I got home from a crappy day of work, a short summer shower decided to make the 6-mile run even harder. It was short enough to keep the temperature above 90 degrees but long enough to make everything humid and steamy. Great.

Needless to say, I wasn’t in the best of moods before the run, so I turned to angry, teenage guy music for my Pandora station: Hard Rock. I wanted music that was as angry as I was. I wanted to punch something and I wanted something that would make me run through a brick wall.

Did it work? Well…

Yes, I have a preprogramed Limp Bizkit Pandora station and have liked many of their songs (don’t judge, I was 15 when they became popular. It was perfect music for a white teenage boy in the suburbs). Sadly, this is not one of the songs I liked, mainly because it’s slow and it sucks.

Angry run on a bad day has a bad start. This is shaping up to be a disaster.

On those rare occasions when I went to the rec center during my freshman year of college, this song would undoubtably play over the speakers. It was a given, and I’ve been engrained to get pumped to this song like Pavlov’s dog.

I probably shouldn’t, but I like Saliva and I like this song. It doesn’t have the energy or intensity as “Click, Click, Boom,” but it’s my workout song. More than 10 years later, I just can’t live without you …

Really? Papa Roach had another song?

Again, I’m really sad to admit and embarrassed to type that “Last Resort” was my song during my head-banging, woe-is-me, douchie days (which probably still exist, minus the head banging). I remember getting pumped when the video would come on the greatest ever music video channel The Box (RIP).

But like I said, this was me almost 15 years ago (shit, I’m getting old). I laugh at my former Papa Roach-fan self, and I got a good laugh at this song and the lyrics. “Take these memories that are Haunting me/Of a paper man cut into shreds by his own pair of scissors.” No! Bad, Papa Roach!

But I do commend them. At 15 years old, while I liked “Last Resort,” I never thought they’d get another hit song. Papa Roach proved me wrong. How many people have said THAT before?

I know Kristen likes Sick Puppies and she’s been an avid reader for a while, so I don’t want to lose her following with this one … GREAT song.

Never heard it before. Won’t hear it again.

Yes, I’m almost 30, but even to this day I love Linkin Park. This and “Always” were easily my two favorites during the run.

I guess it’s possible to have a worse birth metaphor song, but it’d be quite a feat.

Disturbed — “Inside the Fire”

And here I thought that Distubed only had “Down with the Sickness.” Pandora, I’m getting educated.

I’m probably about 4 miles in to the run by now and I’m dying. The humidity is killing me, the sweat is pouring and the knee is hurting, but at least the tunes are rocking with this song.

Semi-interesting story about Crossfade’s “Cold.” It was summer and I was back at home in New Orleans visiting some friends when we went out when me driving. This song comes on the radio, I listen to it for a few seconds, and switch the station to something else.

My friend, who is sitting in the back, driver’s side seat, apparently LOVED that song and yells at me to change it back. I say no, that song sucked, let’s listen to this. He, on summer break from I assume Starfleet Academy where he roomed with Spock, applies a Vulcan death grip to my shoulder, causing me to flinch and swerve across two lanes on the interstate before correcting and barely avoiding the side wall.

And that’s my Crossfade story. Don’t mess with their fans. They’re intense.

TWO Five-Finger Death Punch songs?!?! It’s like Pandora knew my day was bad and tried its hardest to make me happy with these precious gifts of joy.

I finished the killer run with back-to-back songs about dying. Is it a sign? Probably, but chances are I’ll be back out there on Wednesday for more.

I like 30 Seconds to Mars, but I would like the closing songs to have some energy to them. This song would be fine if I’m dicking around at work or writing a crappy blog post, but not when the finish to a rough day and a hot, painful run is visible.

But it got me to the end. So goodbye, run of death. I am finished with you.

I was expecting more from Hard Rock. I thought there would be some Metallica, Motley Crue or God-forbid, Ramstein. Instead it was a lot of sad, mopey, whiney songs. If I wanted that, I could have just listened to Dashboard Confessional.

Still, it’s not a total loss. I got to re-connect with my teenage years, and that’s always fun … and depressing.